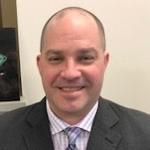 CANTON, MI - May 27, 2021 – The Michigan Amateur Hockey Association (MAHA) announced today that Howard (J.P.) Parmentier has been appointed the new Michigan Referee-in-Chief by USA Hockey. Parmentier brings over 20 years of leadership experience in the hockey community, serving in both the Detroit-metro area as well as the Upper Peninsula, with a broad perspective on all areas of the state.

Parmentier will lead the growth and development of the Officiating Program in Michigan. This will include supporting all growth initiatives, scheduling and conducting officiating seminars, as well as assisting in the development and distribution of educational resources.

“I am excited to take over this role," Parmentier stated. "I look forward to working with MAHA, USA Hockey, Michigan Supervisors, and all Michigan Officials.”

Previously, Parmentier served as the USA Hockey Michigan District 3 Referee-in-Chief from 2007 to 2012. Since 1998, he has contributed to USA Hockey in numerous roles, including Officiating Seminar Staff and Coordinator, Instructors Camp Educator, Supervisor of Game Reports and Evaluation Staff.

Parmentier is a Superintendent of Manistique Area Schools.