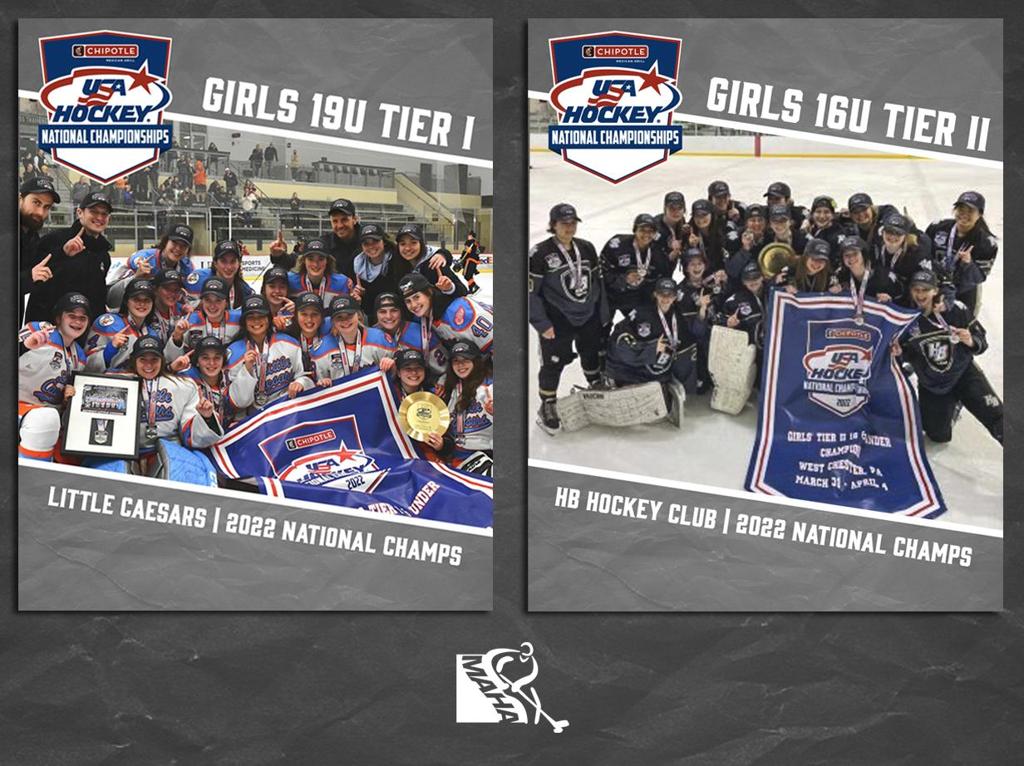 April 4 was Championship Monday for the 2022 USA Hockey National Championships, and two Michigan teams are coming home with hardware at the end of the big day.

The LC 19U team, coached by Saverio Posa, Grace Markey, Kenny Ryan, Mellissa Channell, Rob Liddell and Rocky Thompson, wrapped up a perfect 6-0 run through the national tournament with a 4-1 victory over the Philadelphia Jr. Flyers Monday afternoon.

Six of the top eight scorers in the national tournament wore the Caesars’ blue and orange. Kirsten Simms led the tournament in scoring with 10 points in six games, while Cassandra Hall was one point behind with nine. Ella Blackmore recorded eight, while Elyssa Biederman, Kaia Malachino and Jenna Nikles all had seven.

Caesars finishes the season with a 50-11-5 record.

Meanwhile, HB wrapped up the Girls’ 16U Tier 2 1A title with a 2-1 victory over the Philadelphia Jr. Flyers Monday morning in thrilling fashion.

Madison Klamo scored the game-winning goal at the 9:44 mark of the first overtime period, breaking a 1-1 tie and giving the HB girls a national title.

Mikayla Darty scored the lone regulation goal for HB, while Camryn Schwartz made 25 saves between the pipes.

The title game was sweet revenge for HB, after the Jr. Flyers had beat them 2-1 in their tournament opener last Thursday.

It wasn’t the first time HoneyBaked found itself in OT in the national tournament; in the semifinals, in-state rival Little Caesars took them to extra time before Meghan McLuckie scored to break a 5-5 tie.

“For the last two or three months, we’ve been skating for 10 minutes at the end of practice. We honestly believe that.”